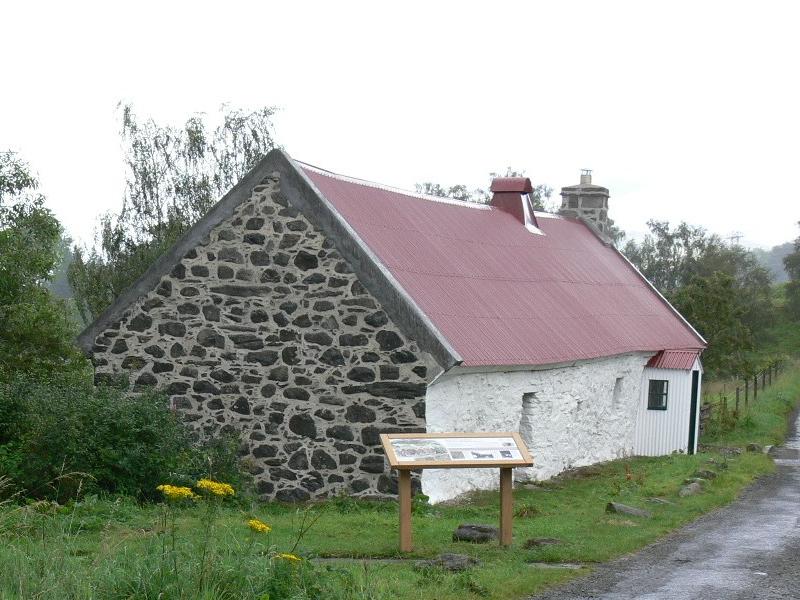 In a new collaboration between Pitlochry Festival Theatre and the National Trust for Scotland, a specially-commissioned soundscape, has been installed at Moirlanich Longhouse, a beautifully conserved byre dwelling nestled in Glen Lochay near Killin. The installation can be heard until the end of September and then again when the property reopens in the Spring after its winter break.

Owned and managed by conservation charity, the National Trust for Scotland, the Longhouse offers a unique opportunity to visit a traditional rural home, virtually unchanged since its last inhabitant left in 1968.

The soundscape is the first in a series of projects between the Trust and Pitlochry Festival Theatre and is designed to enhance visitor experience and connect them with people in the past.

For the project’s lead, Amy Liptrott, Associate Director at Pitlochry Festival Theatre, Moirlanich Longhouse is a time capsule. “It really felt like the outside world had been paused when I went inside. I knew immediately I wanted to create a soundscape inside the house to bring the sense of the hustle and bustle a busy, working house would have had.”

The installation, which was created by sound designer Fraser Milroy features the voices of three actors; Elspeth Turner, Iain McRae and Fergus Munro. Visitors can hear residents going about their daily lives, minding the fire, laughing, talking, singing, milking and praying before bed. The soundscape hints at the world outside too.

According to Amy, she wanted to share the trials and tribulations of people from the past with people now and show that we’re really not that different. She said: “The people who lived in and around Moirlanich Longhouse for 200 years between the early 1800s to late 1960s were skilled, in-tune with nature, got hungry and thirsty, wept at loss, rejoiced and celebrated, and didn’t always mind their manners.”

NTS’ Eleanor Murray said: “The project at Moirlanich Longhouse brings the site to life through the sounds of the past and lets us hear the echoes of the people from the past. Since being installed in early September, visitor feedback has been positive, with comments mentioning that it was like listening to the ghosts of the house and that they’d taken more time looking about the rooms and thinking about the inhabitants lives. It really does make you experience the property in a different way and connects us with the people who lived and worked in this extraordinary place.”

itison have launched their annual Social Bite fundraiser where you can donate £5 to buy a meal for the homeless this Christmas.

Great Scottish Run have announced their Greatest Black Friday deal and this is one you don't want to miss!

Today, organisers of Out East Festival have announced the musical line-up for 2022’s family-friendly extravaganza in Dalkeith Country Park.

The organisers of the French Film Festival UK are delighted to reveal an exciting new edition of the online programme which will run from Friday 3rd to Sunday 12th December.

Entries are now open to junior teams across Scotland to win the chance to be put through their paces by Scotland international Hamish Watson at DAM Health Stadium in 2022.

Make it Maldron this panto season

DF Concerts & Events have announced an exciting new addition to the festival calendar - Connect, which will take place between 26th-28th August 2022!

Quarriers is appealing for donations to help homeless young people across Scotland to receive a gift over the festive period.

Dobbies' Style Expert, Rebecca Stanton, will host a free virtual event to get customers in the festive spirit with a Christmas Your Way live decoration demonstration.

Five Carnival super fans will get unlimited access to the biggest show in town!

The Lion King returns to the Edinburgh Playhouse

The Edinburgh Playhouse in coordination with The Walt Disney Company UK has today announced that the award-winning musical THE LION KING will roar back into Edinburgh next summer.

A Great Day Out in Scotland

A NEW campaign encouraging people across Scotland to experience a Great Day Out across the country this winter by taking advantage of a 50% discount offer has been launched by VisitScotland.

Dobbies gets into the festive spirit with a Christmas Shopping Night

Dobbies, the UK's leading garden centre, is inviting shoppers across Scotland to join them for extended shopping hours to raise funds for Teenage Cancer Trust.

Perth’s newest lighting trail experience invites the community of Perth to get festive and give back this Christmas.

Book Week Scotland kicks off today, marking the tenth anniversary of the country-wide celebration of reading and writing!

Runrig have announced the official Facebook watch party of their newly released music documentary There Must Be A Place.

Dobbies has teamed up with the National Trust for Scotland, to give listeners the inside track on what it takes to maintain its 38 beautiful gardens all year round.

Tickets go on sale for The Scottish Wedding Show 2022!

Ring the bells and summon the brides and grooms to be, the Scottish Wedding Show is back with tickets on sale for Scotland's largest wedding showcase on sale now!

Scotland's largest caravan, motorhome and holiday home exhibition is back, returning to the SEC, Glasgow from 3-6 February 2022.

In the festive spirit of giving, Dobbies has launched a new campaign to share some joy in the run up to Christmas.

itison Drive in Movies Christmas is back!

Kiltwalk set to return to cities across Scotland in 2022

Kiltwalkers will have the chance to put their best foot forward for the charities of their choice next year as the event makes its full physical return across the country!

After six years presenting on Sunday morning breakfast together, Ewen and Cat will be handing over their early Sunday mornings to their mate Greigsy, in trade for a well-deserved lie-in.

Mogwai revealed as Scottish Album of the Year Award Winner

The winner of Scotland’s national music prize, The Scottish Album of the Year (SAY) Award, was announced as Mogwai – ‘As The Love Continues’ at a stunning award ceremony in Edinburgh’s Usher

The Glencairn Glass launches its first ever crime short story competition with the theme: “A Crystal Clear Crime”.

The Royal Edinburgh Military Tattoo has unveiled a bold and exciting new brand proposition as it prepares to return bigger and better than ever before.

The Crusoe Hotel, Lower Largo will host a spooktacular autumn festival on Sunday, 31st October. It's a must visit for families across Fife and beyond!

Four days to go until the Scottish Album of the Year (SAY) Award reveals the winner of ultimate title and stunning trophy.

Jack and the Beanstalk

Join Dame Nellie Numpty and her useless son, Jack, for a traditional family panto, full of magic, laughter and excitement this Christmas!

The Alhambra Theatre presents the Christmas Panto 'Cinderella' from 15th to 27th December 2021.

Enjoy a fun filled day at the East Neuk Christmas Market on 12th December with a good choice of seasonal food, produce, crafts and street food, plus Santa's Grotto!

Santa Claus is Coming to Town

Santa really is coming to town! Enjoy an extra magical experience this year when Santa comes to the Kingsgate Shopping Centre.