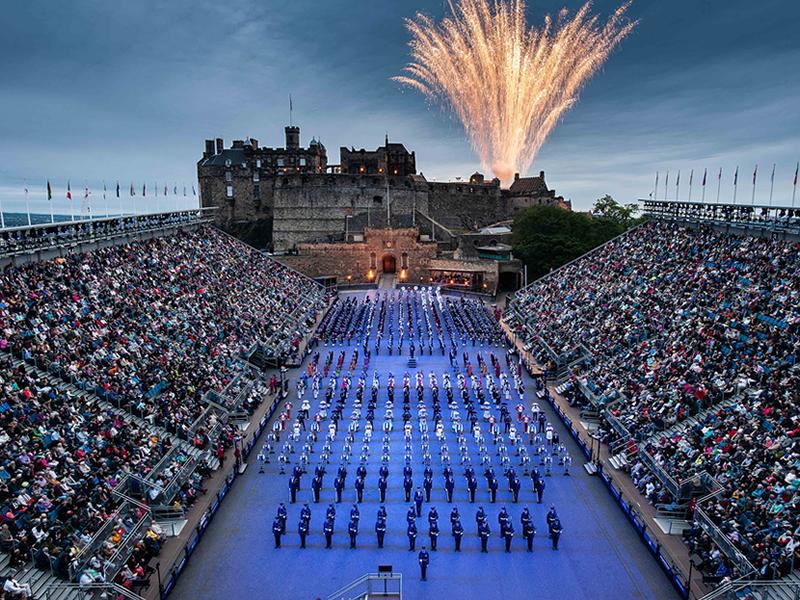 Tickets for the 2021 Royal Edinburgh Military Tattoo are set to go on sale on Monday 19th October. The announcement comes as Michael Braithwaite is appointed as the Tattoo’s new Creative Director, the first dedicated creative role in the organisation’s history.

Michael will join the wider Tattoo team this month as they begin planning for next year’s show, putting on a safe and unforgettable event that combines military precision, live music, breath-taking lighting and special effects and fantastic entertainment. Tickets for 2021 officially go on sale online and via phone at 10am this Monday, 19 October.

The 2021 seating plan has been considered to allow social distancing measures, with a reduced overall capacity and tickets available in sections of up to four seats together. Those who transferred their tickets from 2020 were first to select their seats prior to public sale.

As artistic planning gathers pace, Michael will define the creative theme of the Show, bringing it to life on the iconic Edinburgh Castle Esplanade. His appointment demonstrates the Charity’s commitment to creativity, innovation and putting on an unforgettable show next year, returning to the Castle with a bang!

The Tattoo was originally born out of the Second World War with the aims of raising morale after dark times, entertaining and bringing people together and the Charity will continue to uphold these original values, committing to next year’s event and giving fans of the Show near and far something to look forward to.

Buster Howes, CEO of The Royal Edinburgh Military Tattoo, said: “The past few months haven’t been easy for anyone, however we’re now ready to look forward to 2021 and are committed to delivering a safe, thrilling and uplifting spectacle for our audiences.

“We are renowned for our military precision and skill, this has evolved over many years of practice and experience and this rigorous approach has enabled us to navigate the challenges of the last year and to plan for all eventualities in the coming year, ensuring that Tattoo 2021 adheres to all relevant guidelines and is safe for audiences, performers and staff.

“This is a new era for the Tattoo. I am privileged to be leading the team as we enter our eighth decade. Tickets going on sale mark a turning point for us and in these uncertain times we want the 2021 Tattoo to be a beacon of hope – we will be back, and we can’t wait to see you.”

Michael was previously Global Shows Director for all live entertainment in Merlin Entertainments Group resorts, theme parks, attractions, and hotels in 23 countries worldwide, creating and producing some of the world’s best loved attractions. Prior to his role at Merlin, he was responsible for producing the first pan-London Outdoor Festival as a key event for Festival 2012, London 2012 Olympic & Paralympic Games.

Michael Braithwaite said of his appointment: “Over the years I’ve been hugely privileged to work for some of the biggest entertainment brands and productions in the world, but this is definitely one of my most exciting challenges yet.

“I’m very much looking forward to taking the creative reins of the Tattoo and building on the fantastic shows that have been produced over the past 70 years. It’s a unique and remarkable event, and I can’t wait to embark on this new chapter.”

Tickets for The Royal Edinburgh Military Tattoo go on sale at 10am on Monday 19th October 2020 online at www.edintattoo.co.uk/tickets or via telephone on 0131 225 1188.
Standard seats are available from £25 to £90, with Premier Seats, Royal Gallery and Hospitality Packages starting from £134.

edify & The University of Glasgow presents, Burns Beyond Reality, A VR storytelling of 'Tam O'Shanter' on Saturday 30th January!

Strictly Presents: The Power of Dance

Don't miss Strictly Presents: The Power of Dance, a brand new dance extravaganza when the tour comes to the Alhambra Theatre in June!